Read the characteristics of the three general stove groups shown below and select the group that best matches your planed activities.

Go into your selected group and review the models.  We have selected models within each of the general stove groups that have enhancements that make them better adapted for your particular outdoor activity.

The 3 Stove Groups are:

*While alcohol could also be considered liquid-fuel, in this group we are focused on what is commonly called the Alcohol Stove where no fuel is pressurized in a heating tube.

Liquid-fuel stoves have been around a long time and have a good heat to weight ratio.

Today’s models are durable and work well even at high elevations or in extreme cold.  If you are going to be in temperatures that hover around zero degrees Fahrenheit, this stove group may be for you.

Although recently canister stoves have made great improvements for use in extreme cold and cranking out heat to melt snow, at this point liquid-fuel stoves are still preferred with their proven track record.  Large groups also find this type of stove a good choice because of the amount of heat that can be produced.

These stoves typical have a separate fuel container making them bigger and slightly heavier than comparable canister stoves but this configuration is typically lower to the ground and present a stable cooking base.

To use this type of stove, most must be primed by placing a small amount of fuel on an outside fuel bowl located under the fuel tube and igniting it.  The resulting flame warms fuel within the stove’s burner system and vaporizes the fuel.  The vaporized fuel is forced out the burner and provides the flame for cooking.

This process could be considered a fault since the priming fuel is ignited in the open and the danger of catching something on fire or spilling fuel is possible.  Additionally, this vaporizing method pressurizes the fuel to the extent that as it exits the burner’s orifice it is noisy.  Some say it sounds like a small jet but the majority of the users find the noise acceptable.

The type of liquid fuel used varies between models.  Some burn exclusively naphtha, commonly called white gas, while others are multifuel stoves that can burn almost any liquid fuel available.  The ability to burn different types of fuels can be very useful for backpackers doing long treks or traveling in remote countries where only certain fuels are available.

Maintenance is also a consideration for liquid-fuel stoves while not extensive or difficult, these stoves will require more maintenance than canister type stoves.   Time between services depends upon the fuel type used, its age and how often it is used.  Most users don’t consider this necessary cleaning and maintenance as too big of an issue but it is an addition step that is not required as often with the canister type stoves.

The Whisperlite Universal Stove is capable of burning both multiple liquid fuels and fuel from canisters. Its design builds on earlier versions that have had outstanding success in the field for reliability and performance.   It is probably the most popular liquid fuel stove out there and now it can burn gas from canisters too.  MSR, the stove’s manufacturer, did even more to improve this stove.  The simmer setting while in the liquid fuel mode is now better and more controllable because of changes made to its burner mechanism.  The stove’s legs are not wire anymore and give even better stability to the stove and the pot holder is now larger for holding bigger pots. 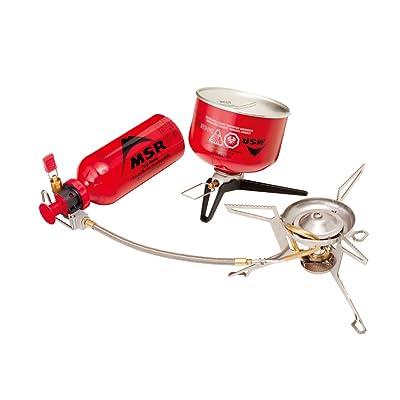 When this stove is switched over to canister mode, it has the ability to burn with the canister inverted.  This significantly improves cold weather and low fuel performance.  It will function in temperatures down to 0°F before you need to switch to liquid fuel.

This stove gives its owner an advantage when traveling to remote countries where the types of available fuels vary.  Switching over to a new fuel type is simple but requires changing out some small parts.  This is not a big deal, unless you lose the parts.  You could take some backup parts if you are really going remote.

With its latest improvements, this stove will remain on the highly popular list for years to come.  It is not an ultralight stove or a self-contained integrated stove but it is tops for all around use and it might be the stove for you if you want an excellent all around stove that you can count on.

The MSR XGK EX Multi-Fuel Stove is a true expedition stove.  It has been around for over 35 years and is considered one of the best stoves for extreme conditions.  It has had various improvements over the years but has always been know as a powerful, reliable and loud stove. 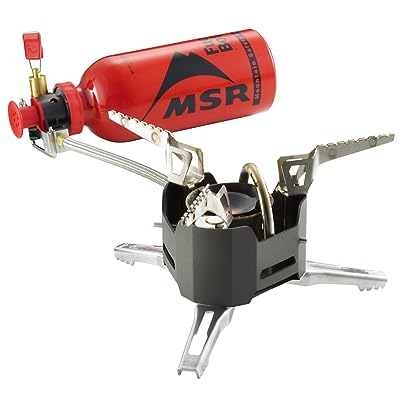 Its is not really noted as a good simmering stove but can simmer acceptably if the fuel is not pumped too much.  That said, this stove is really about cranking out the BTUs and melting snow while a group of hungry people in heavy parkas watch.  If you are going where the average temperature is around 0 °F or plan on climbing tall icy mountains where equipment failure would be a serious problem, this could be your stove.

A stove that competes with MSR’s Whisperlite Universal Stove is the Primus MultiFuel Stove. This stove also has the ability to burn both liquid fuel and canister gas.  It is a reliable stove and noted as having high quality parts and construction.  It will become a favorite for world travels because of its quality and abilities. 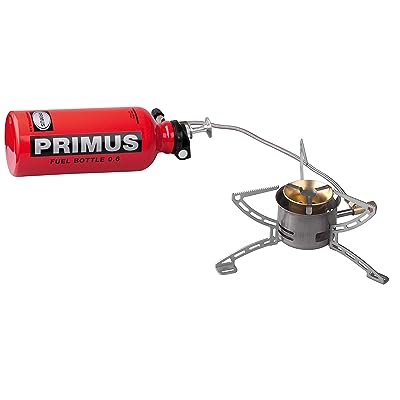 It separates the fuel supply and stove allowing for better stability and the use of a windscreen, which must be purchased separate.   The fuel hose is more flexible than the one on the Whisperlite Universal so it packs better but its metal pump makes it weight more.   (11oz vs: 15oz, including canister)

If you are considering MSR’s Whisperlite Universal Stove, then you should also look at this one too.  Their function and operation are similar and both are great stoves.

Canister stoves use pressurized gas for fuel.  They are considered easier to use than the liquid-fuel stoves since no priming is needed and cooking can begin instantly.  Its operation is similar to that of gas stoves found in homes with most having the ability to easily adjust the flame for cooking different foods.

Some models are very compact and  lightweight.  This stove group may be for you if you plan to do most of your hiking in the summer or like simplicity in your equipment. The pressurized fuel canister can contain a blend of propane, butane or isobutane.  These fuels burn clean and minimize cleaning and maintenance.  A higher blend of propane works best in cold-weather conditions but still has diminished performance in cold weather since gas pressure decreases proportionally with temperature.   In temperatures below freezing some models of canister stove will not function correctly while other models, which use modifications like separating and inverting their canister or using a regulator, can still function.

The integrated stove is another modified canister stove.  It incorporates a high efficiency heat exchanger with specially designed cookware to increase fuel efficiency and reduce boil times.  Its parts fit into the cookware to allow for efficient packing. The canisters themselves are difficult to determine remaining fuel levels and can lead to taking an extra canister since they cannot be topped off before leaving.  These empty canisters become waste and are considered hazardous by some municipalities.

The WindPro II by MSR is a canister stove that has a wide range of uses thanks to its ability to invert its fuel canister.  By inverting the canister it changes from a traditional upright canister stove mode, where efficiency and flame control are best, to a liquid-feed mode.  In the Liquid-feed mode, performance in cold weather, high elevations and low fuel conditions is improved.  The reliance on internal canister pressure is significantly reduced when inverted. 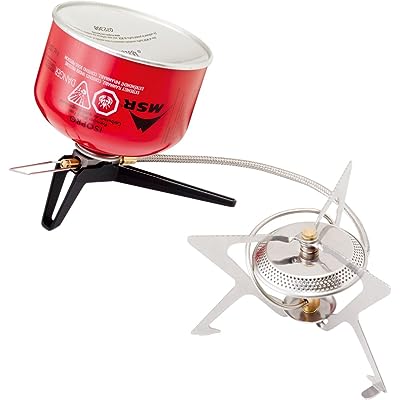 The flame control is good in both modes so cooking as well as boiling water is possible.  A fuel line separates the stove and the canister allowing a windscreen and heat reflector to be used for more efficiency.  Additionally, the separated stove offers better stability for cookware and 10” diameter pots can be supported on this stove.

The stove weights 6.6 oz. and boils a litter of water in 3.4 minutes.  This stove is one of the best all around backpack stoves on the market today.  The statistics and reviews for this stove are impressive and while no stove is ideal for every activity, this stove covers a wider range than most.

It is easy to use, not too large and very quiet.  It has a regulator to help it burning well in cold conditions and high elevations.  It is well made and can be counted on in harsh conditions.The Reactor, also by MSR, is an integrated canister stove that uses a high tech heat exchanger that helps it boil water in record times, equal to the WindPro II, but an even more impressive fact is how well it works in the wind.  In tests where most stoves show a big difference in boil times between no wind and wind, the reactor has almost no difference in times.  This could be the most windproof stove ever made. 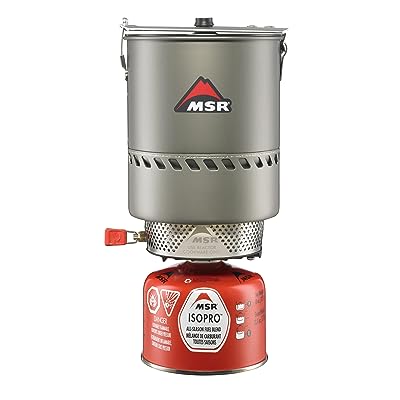 This stove is more specialized than the WindPro II.  Two limiting factors for this stove is:

1) It has an integrated system with dedicated cookware making it very difficult to use other      pots and pans for cooking.

2) It does not simmer well making it a stove better for boiling water only.

But, if you are a climber or plan to be hiking in harsh conditions, this may be your stove.  Its simple operation, yet cutting edge design make it an impressive stove.

This stove has a very fast boil time of 3.0 minutes for a liter of water at 68° F.  It comes with a two-liter pot and can be used with other cookware.  The stove’s size makes it good for two or more people and there is an optional three-liter pot made for itJetboil’s Helios is another excellent integrated canister stove.   Like the WindPro II, the Helios uses the inverted canister for improved function in cold conditions or high elevations.  The inverted canister also gives consistent output as the fuel empties.  The Helios has its fuel supply separated from the stove giving better stability and allowing for use of a windscreen for more efficiency. 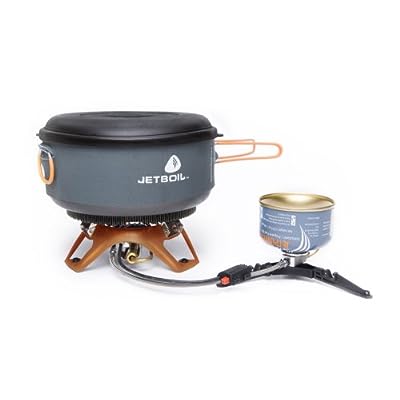 The build-in piezo lighter makes lighting the stove easy and works well for windy conditions. Flame adjustment is good so cooking as well as boiling is possible.  At 28 oz. this is one of the heavier stoves but if you have a group or like having the many benefits this stove has for the added weight, then this may be the stove for you.

If you are planning on doing some summer hikes and want an easy to use, easy to pack lightweight stove, the SOTO Outdoors – WindMaster Stoves is all that and more.  Soto builds on its successful OD-1R model by adding features that make it a better performer in the wind.  This stove comes with a micro regulator to address temperature and fuel level changes.  Plus, it has a swappable pot support, which allows for different sized pots depending on your group size and needs.  It has fine flame adjustment for cooking and boiling. 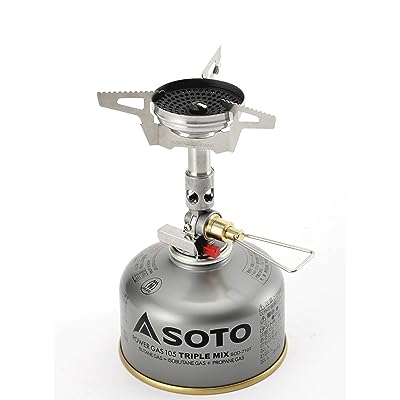 The SOTO Outdoors – WindMaster Stoves weights in at just 2.3 oz. but can still get a liter of water to boil in 3 minutes and 54 seconds.  Definitely consider this stove if you don’t need the horsepower of the other stoves shown above.