It has been over a decade since the first version of Concept 2 Model D rowing machine came out, but it still remains the best-selling Air Resistant rower. It is a reliable, solid rower that will last for years, even with regular heavy training. It is on the higher end of the price range compared to other brands, but has a bunch of sophisticated features which most users believe justifies the cost. Being an air resistant rower, it has a smooth action and very closely emulates the action of rowing on water. It adjusts to the user’s efforts; the resistance is stronger when the user rows harder.

Concept 2 has been dominating the rowing machine market for many years now and Model D is one of its best inventions. It is the first choice for serious rowers and most health clubs. It has a sturdy frame and has proven to last for years, even when used intensely every day. It was updated in August 2006 with features such as: redesigned foot stretchers, modified monorail artwork and updated frame lock mechanism. The new features provide extra comfort and make it more portable; making the machine even more appealing to the rowing crowd. 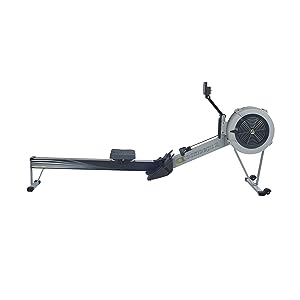 This is the best rowing machine I've bought. It is save my life. Love it so much

Resistance Type: This is an air resistance rower and the best of its kind. It has a flywheel attached to fan blades. When the handle is pulled, it creates wind, which generates resistance. The amount of resistance is determined by how hard the user rows.

Like any other air resistance rower, the fan can create a lot of noise, which may not suit everybody’s taste; it may be more suitable to a rowing club than a home gym. It has a large main rail, which requires a decent sized space. Unlike gym machines like the treadmill where the speed is set at a particular rate, the user can change the resistance level on the fly. Users can row at their own pace and intensity and the resistance changes accordingly. Apart from being able to control the resistance, there are options to change the feel of the rowing experience. Like gears in a bicycle, the different settings give a different feel when working out.

The equipment comes with a standard Performance Monitor 3. This is the feature that most users rave about. It is a mini-computer that is loaded with options. It is simple to use and monitors everything that a serious rower could need. Concept 2 calls this performance computer a “training partner” and it most definitely is. It tracks speed, calories, distance, pace and watts. It collects very piece of data a rowing machine could collect and displays it on the excellent screen for the user.

The large and easy to read display makes it very convenient for the user to track statistics while working out.  There are five different graphic displays.

The display device feels and looks durable. The buttons are made of tough rubber that can take several years of intense usage. The buttons look like they won’t ever fade away. The monitor is attached to an adjustable arm so it can be moved up and down. It is powered by 2D batteries. A very cool feature of Concept2 Model D is the power generation feature. It helps preserve the battery life; the rowing action generates energy that powers the performance monitor.

Another interesting feature of the machine is the LogCard. It stores the workout data for up to five different users, monitors every meter the user rows, saves specific workout steps and comes in handy if using more than one Concept2 equipment. The data can be uploaded to PC or MAC and then to an online logbook. A good number of users enjoy this feature because they meet other rowers on the concept2 forum. They share their experiences and gain useful tips from other members.

The machine is highly durable and built tough. It is commercial grade, so it is built to withstand rigorous workouts. The base has legs and seat-track made of high quality stainless steel. It has an aluminum front and an aluminum I-beam monorail.  Multiple users of varying strength levels have reported that model D performs like a new machine even after 10 years of usage.

Majority of the users have rated Concept2 Model D with 5-stars for reasons such as realistic and slow rowing motion, solid built, and over the top performance monitor. Users love being a part on the concept 2 community. The machine is perfect for users of all fitness level; from amateurs to professional rowers. Many users have owned the machine for a decade and it is still going strong. It comes with a 5 years warranty for the frame and 2 years warranty for all parts.

There are very few cons associated with Concept2 Model D. The unit is 9 feet long which requires decent space to set it up for workout. It can be too noisy for a home environment. The handle can be a little rough for amateurs. Apart from these disadvantages, it is one heck of a rowing machine. More about rowing machines read on.