Regardless of the quality of knives that you buy, the never come with a warranty that guarantees you it will be able to maintain the same sharpness and precision as long as it is functional. To be able to keep the knife useful, you have to sharpen it occasionally. This might be a challenge in some instances but not when you have the Chef’s Choice 130 Professional Knife-Sharpening Station, Platinum.

The 130 is the best knife sharpener, a simple easy to use and highly functional sharpening station that is very useful especially considering that it is able to handle a number of tasks that include steeling strops and also sharpening.

The best part about it is that it allows for the sharpening of virtually any knife that might be in a standard household. With that said, given it portability, functionality and usability, this device easily scores a 4.6 out 5 which is a very excellent performance. 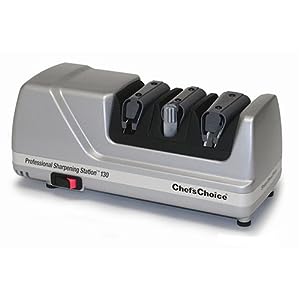 This is the best I have ever used. It is superbly easy to use and does not require you to have any prior knowledge to operate it...

1. The on and off switch

To reduce the chances of injury, the Chef’s Choice Model 130 Professional Knife-Sharpening Station has a switch that allows you to turn the device on or off when using it. This is very vital as you may get injured in the process of changing the knives that you’re working on. The switch is out in the open and is easy to reach for and also does a lot to help save you a good amount of energy since you’re able to switch it off every time that you’re not using it. While this might sound like a very basic feature, it does a lot to add to the value of this gadget and it also reduces the chances of getting injured.

For the purpose of sharpening, a hard surface is highly advisable, this provides for a stress free experience not to mention this makes it for you to get the angles right and more easily. The stropping is one part that can be a bit complex. To get a super sharp knife that is able to cut with the best precision and ease, stropping has to be done. Thankfully the Chef’s choice 103 professional knife sharpener also has a stropping disk that is flexible so as to make the exercise simpler and more effective.

While sharpening, it can be particularly tough to get the right angles that will allow you to get the best results, in most tutorials, making a mark using a marker pen is usually advised. However, with this device, this does not have to be the case. The angle guides make sure that you’re placing the knives at the best possible angle for the nest possible results that will be able to last longer. It is a very unique feature that is very helpful both to those that are using the device for the first time as well as those that are more conversant with it.

While these feature may sound quite attractive, there are a number of advantages that come with as well and more so those that have been experienced by other users.

While most customers may not be happy about the two stages, the device does offer a lot of functionalities on the same two stages and is able to sharpen knives on an even shorter time frame. This is what most people yearn for. A fast and efficient device and that is what the Chef’s Choice 130 Professional Knife sharpener offers.