Do you love healthy cooking that retains most of your food’s nutrients, and are you looking to bring down your cooking time by 50% ? If your answer is ‘yes’ to both, the Cuisinart 1000-Watt 6-Quart Electric Pressure Cooker is the perfect kitchen appliance you need.

Design wise, it looks simple, elegant and blends in perfectly with any modern kitchen. Though it runs on electricity, its functionality is similar to any conventional pressure cooker that operates on an electric or gas stove. 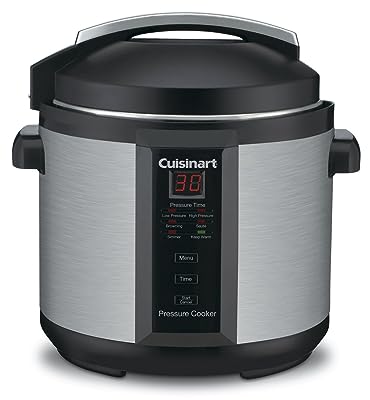 You do not need a giant pressure cooker unless you are canning large amounts of vegetables or fruits. Moreover, a big pressure cooker eats up your precious kitchen space. The Cuisinart 6-Quart Pressure Cooker is very compact; it helps you cook for more than three people.

It can also be used for cooking meat with minimum amount of water. This applies even to all your vegetarian recipes; you will never have to fill water to the pot’s maximum level.

A common issue most people face while operating a conventional pressure cooker is is that they cannot know the cooking time, temperature and pressure inside the pot without adjusting the PSI (Pressure per Square Inch) manually. This difficulty is eliminated in the Cuisinart Electric Pressure Cooker which makes is more user-friendly.

You can easily make adjustments to the cooker by simply pressing the buttons provided on its front. There is also an LCD that displays the amount of pressure inside the pot along with the time for which the food has been cooking. You can see the increasing temperature inside the pot when pressure and heat start rising.

Calories alone are not sufficient to keep you in good health; you need micro-nutrients like Calcium, Iron, Magnesium and so on. Pressure cooking is considered as the most efficient way of cooking that helps the food retain most of its micro-nutrients while you cook cereals, vegetables, pulses and meats.

How is this possible? It’s actually simple – the steam released from the cooking food does not escape the pressure cooker. With the Cuisinart 6-Quart Pressure Cooker, you can cook meals that is far healthier than the food from take-away counters or restaurants.

We all agree that our busy work schedule spares us very less time to spend in the kitchen. But, you simply cannot sacrifice homemade meals and put your health in risk.

The Cuisinart 6-Quart Pressure Cooker makes your life easy by saving 1 – 2 hours of cooking time everyday. The dishes stay as delicious as if you cooked them for a long period. Also, this appliance is easy to operate and clean.

The handles are cool to touch even when the cooker’s body is at high temperature. There are different settings available for cooking – warming, browning, sauteing, simmering and pressure cooking.

The trivet and the cooking pot can be washed in a dishwasher without being damaged. This product comes with a 3-year warranty from the manufacturer.

The Cuisinart 1000-Watt 6-Quart Electric Pressure Cooker is an exceptional kitchen appliance. It helps you cook healthy meals quickly, and is a perfect alternative to its counterparts that need a stove.

Since 1881, delicious and tender pot roast has remained a dinner tradition among food fads that have come and gone. It is perhaps a prime example of a home-cooked meal. Of course, preparing pot roast can be inordinately time-consuming, unless you are making pressure cooker roast beef.

You can save a lot of time if you use a cooker, which means you can even cook pot roast on a weekday with this recipe and eat it by dinnertime. Of course, you cannot cook roast beef without the right cut of beef. You can prepare a fine pot roast with several different cuts of beef, but it is recommended that you choose the chuck or shoulder.

The following vegetable specifics can be substituted with whatever might be in the refrigerator; it will not affect this pressure cooker roast beef recipe.

Cuts should be made through the roast and garlic slices should be interested inside. Next a mixture of flour, pepper, and salt should be prepared in a bag or a bowl and the sides of the roast should be coated with this mixture.

The bay leaves, broth, rosemary, thyme, tomatoes, and any other desired seasonings should be added. The lid of the cooker should be looked and it should be heated on high heat until steady steam is released, which will mean that the cooker has reached 15psi. The kitchen timer should then be set for 35 minutes.

After returning the pressure cooker to pressure, the contents should be cooked for another 4 minutes, then the natural release method should be followed to remove the cooker from the heat. After unlocking the lid, the cooker should be opened and only the roast should be set aside, covered under tinfoil while the gravy is prepared. 2 tablespoons of a mixture of flour, pepper, salt, and 1/2 cup of water should be added to the broth to thicken it.

Finally, seasonings should be added to taste. The roast can then be sliced across the grain and can be served with the gravy and vegetables. Even the leftovers of your pressure cooker roast beef will taste superb.