The rising need for self defense in the modern world has lead to an increase in the carrying and use of items such as pepper spray and knives.

However, the wariness of many people in purchasing obvious weapons such as these has lead to the creation and growing popularity of tactical pens.

Tactical pens are pens with an ordinary appearance that are built with the ability to double as a weapon, making them prime candidates for concealable self defense weapons.  These can be carried as part of your every day activities or even when traveling abroad.

There are a wide variety of tactical pens available on the market, many with various kinds of unique features. For those of you intending on purchasing a tactical pen, there are a few things you need to understand and be aware of before making your purchase.

The following article will provide a broad overview of the various aspects of tactical pens in order to help you understand their uses and aid buyers in their purchase.

Tactical Pens have become for more common – allowing their owners to arm themselves with a hidden weapon that can ward of personal assaults.

The Gerber Impromptu Tactical Pen was designed for  law enforcement and is now available for distribution to the public.

The pen is made from machined steel and is capable of breaking tempered glass or a windshield with its glass breaking tip.

This pen is strong enough to handle the unexpected, and has the added advantage over it’s competition of being a decent writing instrument.

It’s a standard push button pen that can write in dry or wet conditions, but is strong enough to withstand even the most solid impact.

The pen is heavier than pens made from aluminum = but very solid feeling.  The push button top is a little flimsy, but over all this is a great tactical pen that will last you as long as you own it.

The Uzi Defender Aircraft Aluminum Tactical Pen with Glassbreaker is a tactical pen that features a 6” length, a solid glass breaking crown, and can be used as either a kubotan or writing pen. The following review will outline the best and worst aspects of this product. That will help you determine whether this tactical pen is a good choice for you.

The best part about the Uzi Tactical Defender Pen is the triangular glass breaking crown. Which has a point angle of about 110 degrees to ensure that it will successfully break glass of any size.

Additionally, the strength of the crown is surprisingly strong due to the heavy knurling. Which makes it more than solid enough to induce blunt force trauma to any sized attacker.

The pen itself is also well made, featuring a build made from lightweight aircraft aluminum. To top it off, this pen supports various different types of ink refill cartridges. Which is a big benefit for those who are looking for a tactical pen with solid self defense features as well as the potential for a great writing pen.

One downsides of this pen is the amount of times that the pen cover must be rotated in order to retract the tip. This compromises the usefulness of the pen as a self defense weapon as the strength of the pen is not as high when the pen is retracted.

Additionally, this process can be time consuming, which is not ideal for situations where self defense is necessary. It is recommended that your practice rotating the pen cover in order to minimize the time is takes you to carry out this process.

Furthermore, although the glass breaker is quite strong, a more acute angle for the point would have made it even more effective and allowed it to be used for puncturing as well as glass breaking.

However, despite these minor gripes this tactical pen is still robustly made and will ensure that you are confident in your ability to defend yourself.

Ultimately, the Uzi Tactical Defender Pen with Glass Breaker – Black is a reasonably priced tactical pen that is very durable and well-made, save for the few downsides mentioned above.

It is a great choice those looking to purchase their first tactical pen or those who want a high quality writing pen with solid self defense features.

However, for those looking for something a bit more reliable for self defense purposes, you might want to check out the Surefire Hard Anodized Aluminum Writing Pen.

Award-winning knife designer Allen Elishewitz has lived in the Far East and has practiced martial arts over the past 30 years. This training, along with his experience as a Recon Marine, gave Allen the perfect background to design these defensive writing instruments, CRKT Tao Pens. 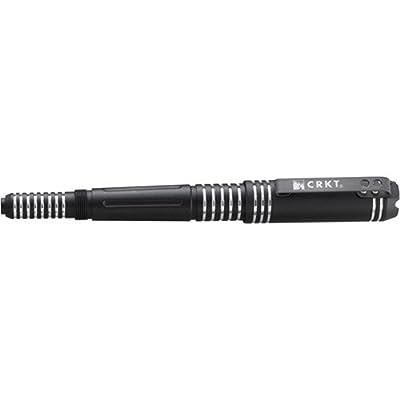 If the user is threatened or attacked, the pens can be used at three levels of defensive force, depending on the type of threat. “At the lowest level of engagement, the impact crown on the cap can be used to strike the assailant on the head or hands by raking or thrusting. ”

At the second level, the more pointed butt of the pen may be used to thrust or provide a disabling pressure point behind the ears, at the armpit or throat.

“At the third level, if the attack persists, the pen point may be thrust for penetration in soft tissues of the throat, chest or abdomen with potentially lethal results if the assailant does not break off the attack.”

The pens are made of 6061 aluminum, precision-machined and hard anodized. The heavy cap is threaded so that it will not pull off in use, and castellated for greater impact.

The flutes and grooves on the pen, combined with the pewter-toned stainless steel pocket clip, provide a secure grip.

All Tao models are functional writing instruments which use the Fisher Space Pen ball point cartridge, a pressurized design developed for NASA.

It has a tungsten carbide ball point and thixotropic ink which will write in freezing cold, boiling heat, underwater and at any angle-even upside down.

Once you have decided on the kind of pen you want, there are a few other factors that you need to keep in mind when making your purchase.

One of these factors is the discreteness of your tactical pen. Many people seek to purchase tactical pens because they do not look like weapons and can be easily carried around without alerting those around you to the fact that you are carrying a weapon.

This is beneficial in many ways: not only will you not get into trouble at airports or other areas with rules against concealed weapons, but in situations where you need to fend off an attacker you will have the benefit of carrying an inconspicuous weapon. This can give you the upper hand in these situations and help you catcher your attacker off-guard. Additionally, if your tactical pen has a DNA catcher than this feature is even more useful; you can likely get a DNA sample off of them without them ever knowing

Another factor to consider when choosing a tactical pen to purchase is the amount of self defense features, which can vary greatly. The two most basic tactical pen features are a pointed tip and a blunted end. The pointed tip is used for puncturing, whereas the blunted end is used for stunning. Ideally, you are going to want a pen with both of these features to increase its self defense potential.

However, sometimes having a blunted end can weigh down your pen and make it quite heavy, so those looking for an effective writing tool may only want a pointed end.

Additionally, some tactical pens also have an indented crown that can be designed for glass breaking purposes, DNA catching or both.

Again, the type of person you are and your reasons for purchasing a tactical pen will determine the worth of these features. If you are a security guard, emergency responder or member of law enforcement, the DNA catcher and glass breaker are both valuable tools that you will be better off having at your disposal.

A final factor to keep an eye out for when deciding on a tactical pen is its quality.

As mentioned before, the quality of tactical pens can vary greatly, so trying out your pen before using it is a great way to ensure high quality.

However, for those ordering online there are many determinants of quality that you can look out for. One of these determinants is the specific design of the pen, including the material it is made of and its proportions.

Your best bet for ensuring that you get a quality pen is purchasing one that is made according to military guidelines.

The effectiveness of the clip is also an important feature, as an ineffective clip can render your pen useless in situations that require self defense.

Once you have mastered these, you will be ready to use your pen at any moment that requires its use.  A good way to practice puncturing with your tactical pen is to use pumpkins, Styrofoam or any other surface that provides an easy opportunity to puncture and strike. Any of these surfaces can also be used to practice using the blunted end or glass breaking crown. A final thing to note is that using a tactical pen as a writing tool can also be difficult and may take some time to get used to.

This is where choosing a pen with the right design and specifications can make a huge difference, as some tactical pens will provide you with a writing experience almost on par to that of a regular pen. Nevertheless, for those who decide to opt for a tactical pen with a focus on self defense, writing is something that will take a bit of time and practice to do comfortably.

The rise of tactical pens has created a new way for the everyday person to defend themselves in situations that require adequate self defense. The popularity of these products has added a whole new dimension to the world of crime, which can be viewed as both positive and negative.

Those who believe that carrying any kind of weapon will only lead to more trouble will not likely be swayed by tactical pens. However, for those who are hesitant to carry a knife on them at all times, tactical pens provide a great way to carry a concealed weapon without having to hide it from view.

They are also a great way for regular writers to implement a self defense weapon into their everyday life without having to make any drastic changes. Despite these benefits, the lack of any laws surrounding tactical pens leaves open the possibility of future control or bans.

If law enforcement or airport personnel decide to set their sights on these products, there is no telling what could happen to them in the future. This makes it a great time to try out tactical pens while their popularity is high and they are not the target of any sort of legal spotlight.

Ultimately, using the above information in your search for the right tactical pen will ensure that you can properly defend yourself safely and legally.